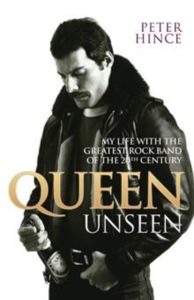 A night going through the secrets of Queen!

As an 18-year-old in the early 70s Peter Hince started out as a roadie for David Bowie, before going on to work with Lou Reed and Mick Ronson. But it was with Mott The Hoople in late ‘73 that he met the then unknown band Queen.

Peter joined Queen full time in ‘75 as they recorded Night At The Opera, and subsequently became head of the road crew, getting to know Freddie Mercury and the band intimately. Peter’s memoir, Queen Unseen, has received critical acclaim and been published in over twenty territories worldwide.

Hear the inside stories of rock and roll’s greats, from someone who was actually there. We’re proud to have Peter as a long-standing member of the club and know you’ll all love this privileged perspective on the golden era of modern music history. That and of course lashings of sex, drugs and rock n’ roll!

Doors at 8pm, event starts at 8.30pm. If you’d like to book supper ahead of the event please drop us a line to reception@unionclub.co.uk