The Union Club is proud to stage a new exhibition by David Ferry RE, one of the UK’s leading print-maker and photomontage artists.

Confectus Britannia depicts a playful and odd marriage between old-fashioned British sceneries and monuments, with a colourful menu of sugary confectionaries, in a series of photomontage and individually edited prints and canvases that portray a surreal punkish aesthetic of rural life.

The unlikely marriages, such as a Cream Éclair cavorting in front of a stately home, or a chocolate chip cookie besides Hadrian’s Wall, are skillfully realised with the artist manipulating tones and types of photography as a painter chooses his palette.

Using combinations of cut-outs overlaid with paint, ink, and glitter, David Ferry broadens the notion of the photomontage. ​Like an auteur editing a film, Ferry appropriates printed material from various sources, and then elegantly makes of this base material a seamless whole that combines the banal and the everyday to create an arresting image that both perplexes and delights the viewer.

Ferry notes: ‘throughout time, confectionary has symbolised the absurd contrast between the rich and the poor, necessities and luxuries, needs and desires. From Antoinette’s brioche, to Boris Johnson’s famous policy on cake: “pro having it, and pro eating it!”, confections were the soft expression of bitter satire. Today, confections compliment our lives and inhabit them with sweet joy, which, in light of today’s realities, remains potent with absurdity.’

Andre Breton opined: ‘The man who cannot visualise a horse galloping on a tomato is an idiot’. Ferry’s work is for the ‘man who can’. 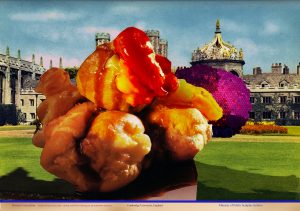 David Ferry was born in Blackpool in 1957. After being was expelled from school, he worked a series of jobs along the Blackpool promenade and later went on to study painting at the Camberwell School of Art and printmaking at the Slade School of Fine Art, London.  His award winning book on the process of montage and collage: Painting Without A Brush, was published in 1991 and translated into French and Spanish, and is an established curriculum book in North American colleges and schools.

Ferry is the President of the Royal Society of Painter-Printmakers RE; Honorary Doctor of Arts, Southampton Solent University; Emeritus Professor of Printmaking and Book Arts, Cardiff School of Art and Design, Wales; Trustee of the Sidney Nolan Trust UK; and former Chairman of the Chelsea Arts Club, London. 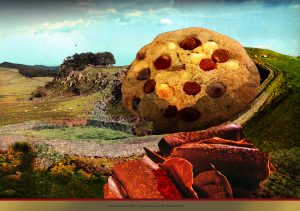