Instant Clash brings together a range of original paintings and screen-prints by the artist, many of which have never been exhibited for sale before.

If painting and printmaking leads Carl Stimpson’s artistic practice, then music is the rhythm section that throbs and hums from the back. Stimpson appropriates song titles, lyrics, album covers and icons in his composite landscapes; often  mashing these up with comic book references together with urban scenes, beautiful people and brand logos. Some of the references to music in Stimpson’s paintings feel more deliberated than others. In many cases content is not always there to reconcile composition or aid context. Music is live in the work. Carl Stimpson is not a music fan who paints. His work is the embodiment of music and art lived and breathed every day. There is always a soundtrack playing along to Stimpson’s experience of the world and his artwork celebrates this with the viewer.

The invocation of brand trademarks and classic comic book characters has become an increasingly prominent feature in recent works. For Stimpson, these brands and graphic symbols have taken on the sacramental power of talismans — the touchstones of his working life. By clashing the lines of these brand names, and by omitting fictional features, the painter divests them of their linguistic integrity – the walls do, in fact, come tumbling down and the sovereignty of the painted image is reaffirmed.

BIOGRAPHY
Carl Stimpson is a British painter and printmaker. Born and raised in Kidderminster, West Midlands, Stimpson now lives and works in London. For over a decade, Stimpson’s practice has drawn on a variety of sources in the development of both its form and content – namely the ‘ligne claire’ style pioneered by the Belgium artist Hergé; late twentieth-century popular music; and the trademarks of well-known industrial brands. In the last few years Stimpson has taken to screen-printing, acquiring a unique take on this process. Often starting with hand painting the colour elements, Stimpson utilises his strong painting background to create distinctive prints.

Stimpson has featured in solo and group exhibitions across the UK and his work can also be viewed around the streets of London. Appreciation for Stimpson’s work is evident across the globe, and he recently held his first international solo exhibition in Russia.

We are also happy to announce Carl Stimpson’s work has been selected by Yinka Shonibare CBE RA for this year’s Summer Exhibition at Royal Academy of Arts. 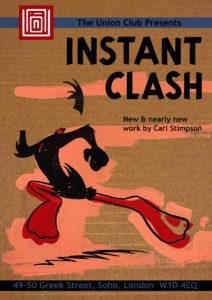