‘Walking into Levack’s studio you’re presented with a horizon of solid oak sculptural forms similar to that of a mountain. Faces being framed within the Georgian esque Illustrations that are layered on oak peaks. These sculptures scattered around the studio in all directions, mirror that of his current exhibition and his works based on ‘Route One’ that the reminisce lay still beneath this moving sculptural backdrop.’

Long-time member and artist Joel Levack’s work is currently hanging in the Studio – although what’s an exhibition without anyone to see it? However he hasn’t lead this throw him off track, and has spent various the various lockdowns we have endured creating yet more work. The most recent is his series of Window Bars, utilising pieces of the old Union Club bar as a canvas. Joel explains the project below…

“Back at the end of November, I was fortunate enough to be the first on the scene when Pete was throwing out the old Union Club bar top, and replacing it with a new oak version. Not wanting to see this piece of club heritage go to the wrong home, I asked if I could turn it into an artwork and promptly shipped it to my current studio space on Old Compton Street round the corner. 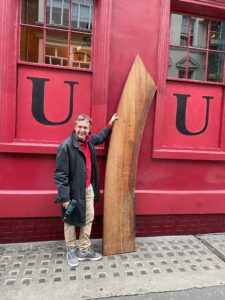 As we continued with the tier 4 restrictions into the new year, it occurred to me that I was really missing the club. The first and obvious reason was The Studio space is currently hosting an exhibition of my Route One collection, artworks inspired by a decade in the mountains, and along with the club, we had to close the doors until who knows when.

Secondly, I miss the building – a Georgian townhouse, rescued and renovated by Pete and Carolyn back when I was just becoming a teenager. And finally of course I miss the people – The Union is a wonderful melting pot of creatives, the staff and the members provide such a positive boost to my visits to Soho. I missed them most.

I had a photo shoot arranged in early January with the wonderful Roo Kendall. He was keen to take full advantage of the empty Soho Streets, and suggested we pass by places that meant a lot to me. We shot some pictures outside the windows – the same place I’d taken a picture of Pete with his much used bar. 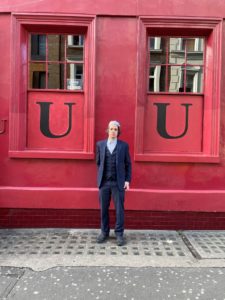 That shoot along with my missing of the club has inspired a new body of work, “Window Bars”. The old oak top, along with its drink stains, chewing gum and cable clips was lovingly sawn into 28 uniquely sized pieces. Twenty eight represents each year the club has been around.

On them is a series of works that represent the window looking in, or perhaps looking out. The characters that appear have no direct relevance to the club itself, they represent the range of characters you might see on looking into a private members club. The diversity of faces that make a space like that so special.”

Each piece is mixed media on reclaimed oak panel – size on request (an average size is around 150mm x 200mm) but none of the pieces are uniform rectangle or square. Mixed media contains use of news and magazine print, PVA glue, acrylic paint, spray paint, oil pastel, wax crayon and pencil. All works are signed and dated.

The works are a series of 28, and are available exclusively to Union Club members. Each piece comes with a drink of your choice – a small token to support the bar when it re-opens.